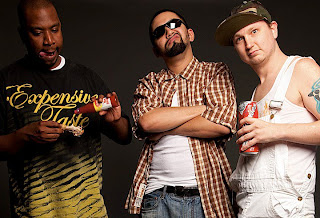 "On Fri., Nov. 11, the three-man Atlanta hip-hop crew featuring Mr. SOS, Ricky Raw and A-Bomb, better known as Mighty High Coup, will celebrate the release of its latest self-released CD, Boom Rap. The album is a slow-and-low party odyssey that’s all about weed, women and song, combining the bedside manner of the Beastie Boys circa Licensed to Ill with a Southern drawl and a big, booming bass-gone-ham. Boom Rap is a more cohesive offering than anything that showed up on last year's CD, To the Moon, which was comprised mostly of rough song mixes — the result of MC Ricky Raw’s computer getting stolen, along with all of the recording sessions he’d been saving on his hard drive. This latest 14-song collection was completed by local producer Wes Green (the Wheeler Boys, Nappy Roots, Zac Brown Band, Franchise Boys, Coool Breeze, etc.) who made all the beats from scratch, and there’s only like two samples heard throughout the whole thing, so naturally it’s a much different record for these guys. If To the Moon was MHC’s "get high album," Boom Rap is its “get drunk album.” Likewise, it has a broader appeal than any of the previous releases even though it’s very characteristic of the group's style. If you’re in the mood for more of a sample-heavy hip-hop joint from these guys, sit tight. MHC’s Darkside of the Boom mixtape is a return to form that’s in the works, and it should be arriving soon...." -Chad Radford for Creative Loafing mightyhighcoup.com D/L MIGHTY HIGH COUP - BOOM RAP ON iTunes