Oak Lonetree & Insight The Truncator – In The Stash (Stream) 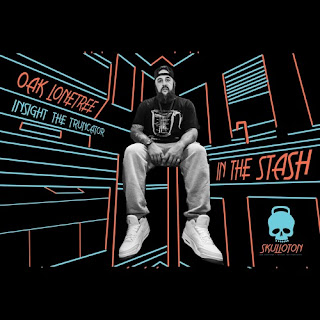 Oak Lonetree joins forces with veteran producer Insight The Truncator for the amped-up joint “In The Stash.” This brand new track is from Oak and Insight’s forthcoming album, Skulloton. “In The Stash” shows off Insight’s booming production with chopped piano loops, big drums and subtle effect. Oak’s rhymes are full of honesty, self-deprecation and just enough humor and braggadocio to keep it interesting while setting himself apart from the pack. Meeting one another in 2018 through mutual friend Yukonn MC, both Oak and Insight call New England home and have become established presences in the local music scene.

And keep watch for Skulloton, available Oct 18th on all digital platforms with Physicals and merch available through Cursed Out Productions.
Posted by GhosTown Music at 2:01 PM No comments:

Sekkond Hand - Pray for Me [VIDEO]

Posted by GhosTown Music at 10:20 PM No comments:

Posted by GhosTown Music at 2:16 PM No comments:


Demmene Syronn (a.k.a. Dirty Ice), half of the Providence based Hip Hop group “DirtyDurdie,” is launching a solo campaign laced with the most personal music he’s ever released. The lead single “You’re Not Alone” is produced by Rhode Island's best kept secret, AD Beats. The song paints a graphic picture of what it's like for many people entrenched in the dark world of substance abuse and the not so glamorous facets of what happens behind closed doors.

According to Demmene, the song was written to combat the public inclination to judge those who suffer from addiction. The intention is to let them know that despite general perception they are not the only ones who struggle with the consequences of personal missteps. Demmene has courageously offered his story so as to lead the charge for those who feel trapped by social stigmas. The overall goal of the song is to inspire those who can relate and to show that substance abuse is not a death sentence, but instead a challenge that can be overcome and left in the past.

lyrics on Genius.com https://genius.com/Demmene-syronn-youre-not-alone-lyrics
Posted by GhosTown Music at 3:55 PM No comments: